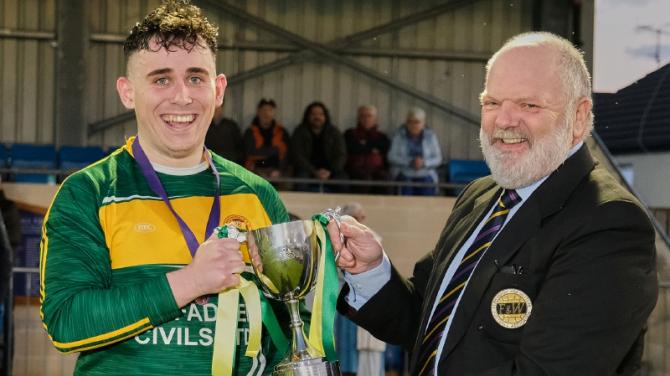 DUNBREEN Rovers Reserves and Mountfield Reserves met in an all-Omagh based clash at Ferney Park, Ballinamallard, in the Fermanagh and Western Reihill Cup Final 2022.The early stages of the match saw chances at both ends of the pitch, however, it was Mountfield, through hero-turned-villain Ryan McGarrity, who drew first blood as they capitalised on a scramble in the Dunbreen Rovers six yard box.Rovers seized their opportunity to level the match on the half hour mark as McGarrity illegally halted a Dunbreen attack and received a red card. Mountfield would now play the remainder of the match with 10 men and Dunbreen skipper Raymond McCloskey made no mistake with the resultant spot kick.As the match approached half time Dunbreen looked to press home their numerical advantage however both sides left the field level at 1-1.The second half started much the same as the first with both sides creating chances but unable to take advantage. The tie would, however, turn in MountfieldÕs favour as Odhran Potter, on as an early replacement for the injured Shane Leonard, seized control of the game. A smart finish just after the hour mark was followed up by a well taken penalty as Mountfield re-asserted their control on the game.Potter went on to complete his hat-trick and seal a momentous win for his Mountfield side as they ran out 4-1 winners.