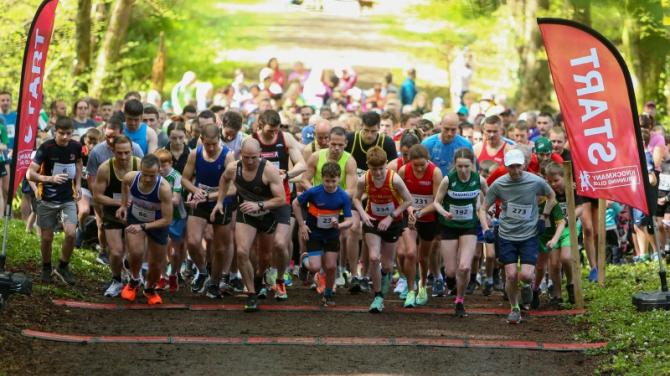 OVER 400 runners and walkers descended on Seskinore on Saturday for the inaugural Seskinore Forest 5k Run and Walk with Kerr Bros Bodywork the main sponsor.

The organisers of the event - Seskinore Rural Community Group - were delighted with the massive turnout and thankful that the weather was settled.

The 5k route was won by Knockmany Running Club athlete Adrian Scullion with Scullion pulling clear of the field to finish in a time of 16.39.

Knockmany Running Club also took the victory in the ladies race with the inform athlete Grainne O'Hagan fresh from second place in the Omagh Half Marathon taking the tape in a time of 18.56.

Nick Griggs, the world class athlete from Newmills, made a special guest appearance in Seskinore and was on hand to start the race and present the unique wooden trophies to the prize winners.

Nick was also on hand to address the crowd and answer a few questions. The Mid Ulster AC runner, who turned 17 in December, made headlines last year blazing to victory in the 3,000m at the European U20 Championships in Tallinn.

Nick added to his ever-rising reputation recently by breaking the European U20 Indoor Mile Record in three minutes 56 seconds.

Race director Ivor Russell said: "We are delighted and grateful that Nick took time from his busy schedule to come to our inaugural Seskinore 5k.

"The crowds were very interested in what he had to say and hopefully he inspired everyone including the younger people."

He added: "Above all this is a community event and the Race Committee wanted the event open to everyone including the faster runners and walkers.

"Also the Race Committee were delighted to welcome the young disabled athlete, Aaron Kerr, along with his parents David and Sandra who form Team Kerr and complete many marathons throughout the country."

The organisers would like to thank all who contributed to the success of this year’s event, with everyone grateful of refreshments served after the race.