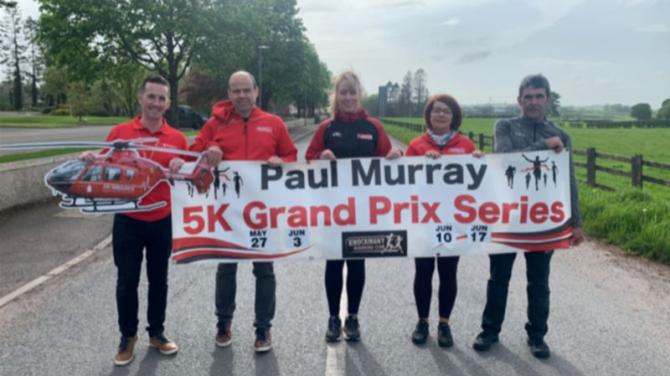 THE popular Paul Murray Grand Prix 5k Series is back this year in Eskra.

The event is raising funds for the Air Ambulance Northern Ireland charity. All proceeds from the event will be given to this vital charity.

The series will now enter its fourth year and so far over £15,000 has been raised for the Air Ambulance.

Damien McAnespie from Air Ambulance Northern Ireland was on hand to help the race committee launch this year's event.

The 5k races all on different routes will take place on Friday evenings (May 27, June 3, June 10 and June 17) starting each evening from Eskra Community Centre at 7.30pm.

There will be prizes for individual races plus age category prizes and overall grand prix winners.

To qualify for Grand Prix athletes must compete in three out of the four races.

Participants who complete the race series will be rewarded with a special Paul Murray Grand Prix medal.

There will be new trophies this year for the overall Paul Murray 5k Grand Prix Series winner in age categories; O40s, O50s and O60S.

There will also be prizes this year for U12 winners.

Registration for the event is online at www.njuko.net/pmurray5km2022.

There are options to register for the overall Grand Prix (four races) or single night race entries.

Race numbers can be collected on Friday, May 27, prior to the event.