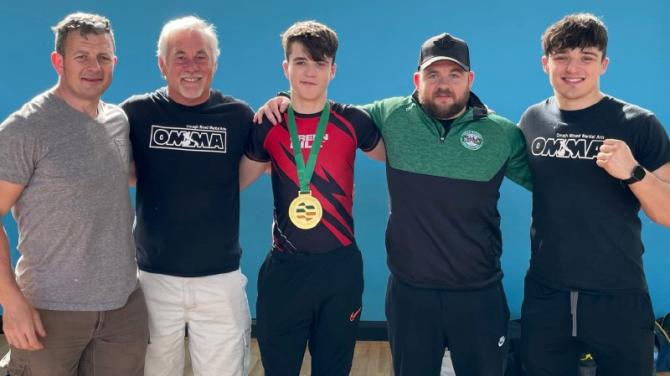 OMAGH'S Morgan Clements is the under 18 lightweight Irish MMA champion.

This was the first time the All Ireland MMA Championships had ever been held in Belfast and the first time any junior from Northern Ireland has ever became an Irish champion.

This year both Morgan Clements from Team Ryano OMMA based on the Drumnakilly Road in Omagh and Eoghan Masoliver from Team Evolve in Derry became the first two juniors to win gold at the Irish MMA Championships.

Morgan and five other athletes from all around Ireland made it to the finals and because of previous performances and ranking Morgan was seeded number one and Oisin Daly from Team Torres was seeded number two.

Both athletes got a bye in the first round and put on opposite ends of the bracket. Morgan's first match would be against Scott McGuiness from SBG Tullamore.

The match finished with Morgan winning all three rounds and moving onto the final.

He would face Liam Burke from Conor McGregor's gym SBG. Liam had just beat one of the favourites Oisin Daly in the semi-final.

Morgan started fast and was winning the striking in the first before being taken down and being held down for most of the first.

In the second round Morgan came out very fast and shot for a takedown, but Liam stuffed the take down and ended up on top.

Morgan did well to get to guard where he began to attack off his back, finally catching Liam in an armbar with less than 30 seconds to go in the second round crowning Morgan Clements the 2022 under 18 lightweight Irish champion.

Next stop from Morgan is a trip to Abu-Dhabi where he will represent Ireland for the second time in the IMMAF World Youth Championships in August.