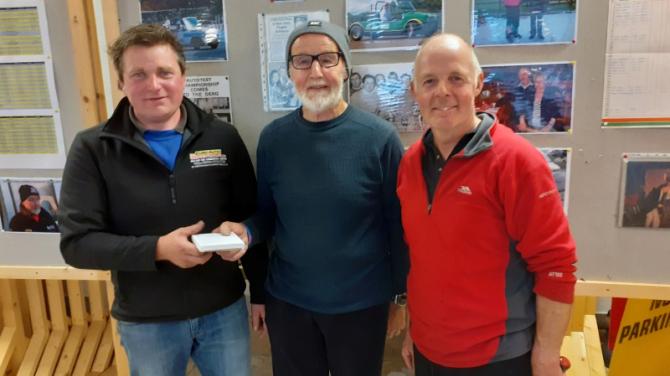 OMAGH Motor Club put together another successful event when they hosted the seventh round of the McMillan Specialist Cars Northern Ireland Autotest Championship.

With mixed weather conditions, the event had a format of 12 demanding tests at the Agricultural Mart Centre with a good entry of 31 competitors.

After the first series of tests, the top of the leader board was closely contested by David Thompson from Manorhamilton, Mark King from Newmills and English visitor, Paul Swift, separated by nine seconds.

Although conditions were ever changing throughout the day, current championship leader Steven Ferguson from Stewartstown recovered from a slow start and reeled in the leaders with fastest times on six of the remaining eight tests to win the event by a margin of over ten seconds and enhance his lead on the Championship standings.

The event also marked the 40th Anniversary of sponsorship by Castlederg autotest legend, Ken Irwin, and as a mark of appreciation, the club organised a barbeque at the end of proceedings which was well supported by invited competitors and friends who competed during Ken’s autotest era and presentations were made to mark the special occasion.

Clerk of the course Dessie McAleer thanked the competitors for their participation and the marshalls and timekeepers who assisted in ensuring the event ran smoothly.

Special thanks were also given to Dessie McAleer and Godfrey Crawford for organizing the tribute event.