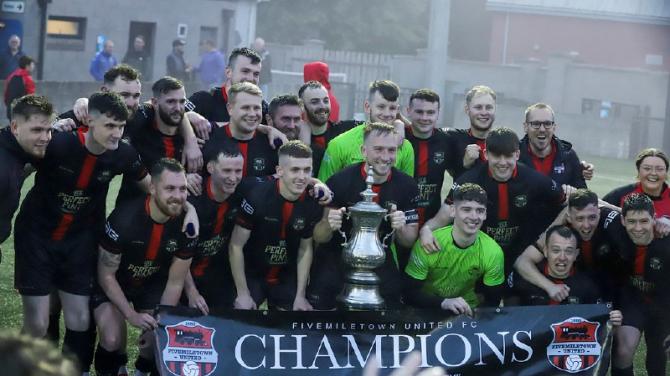 GOALS from Ethan Jordan and Glen Clarke ensured Fivemiletown United lifted the Marshall Cup on Friday night at Holm Park, Armagh, ending the club's 11-year wait for a trophy in the process and capping a fine first season in charge for joint managers Chris McDowell and Barry Anderson.

A week previous it was heartbreak for Town when they were well beaten by Windmill Stars in the Premier Cup final, but the local boys dusted themselves down and produced what felt like the ‘perfect performance’ to get the better of a quality and experienced Oxford Sunnyside team.

That’s according to McDowell, who finally deservedly got his hands on a trophy - just rewards for two decades of service to his hometown club.

Speaking to the Courier on Monday, a delighted McDowell said: “The club has been up and down over those 11 years, so it was great to get over the line on Friday night, especially after what happened the previous week.

“It has been a great season for us, finishing eighth [in the Mid-Ulster Intermediate A League] and reach two cup finals.

“It was brilliant to get our hands on the trophy. I’ve said to several people now that we learnt a lot from losing the first cup final.

“We sat back and reflected on it and seven of our starting 11 hadn’t played in a senior cup final before and that was always going to have a big part to play.

“I think they took that all in with them into Friday night’s game and we produced the perfect performance - and it’s not too often you get to say that!”

McDowell - who started at left-back - singled out goalscorers Jordan and Clarke as standout performers, as well as Kyle Thompson, but he admits “everyone was absolutely fantastic”.

“It would be very difficult to pick a man of the match,” he added.

“You just have to look at Oxford’s team and it was filled with Irish League experience, and to go and match that and beat that, it’s a massive, massive achievement.”

Even before the two cup finals, the team had achieved the objectives McDowell and Anderson had set out.

“The first goal was simply to stay in the league because it’s a very competitive division. It’s only getting stronger. To reach two cup finals was the icing on the cake - but to win the Marshall Cup is way beyond what we felt we would achieve.

“A massive credit to the players. We always said it was in them, they just had to prove it to themselves and they did exactly that on Friday night.

“Working with Barry is brilliant, I think we are like a married couple at times!

“He puts in so much effort as well and I think it’s difficult for him because I am on the pitch and an extra little bit of responsibility falls on him.”

“It sets a great foundation for us for next season, although it will be a short turnaround now!

“It’s a lovely stepping stone for us, it sets a good marker.”

The joint managers would like to “thank all the sponsors, the club for backing us, the fans, the communities and our families”.

“Without them we wouldn’t have achieved this success,” they added.

Fivemiletown started the brighter of the sides with Davy Fulton hitting the side-netting as early as the third minute.

Jordan stepped up from centre-back to break the deadlock from the penalty spot seven minutes before half-time.

Clarke then released Ivan Carson in added-time but there was no way past the goalkeeper.

Fivemiletown doubled their advantage just past the hour-mark when Clarke kept his composure to finish from Ricki Carroll’s pass.