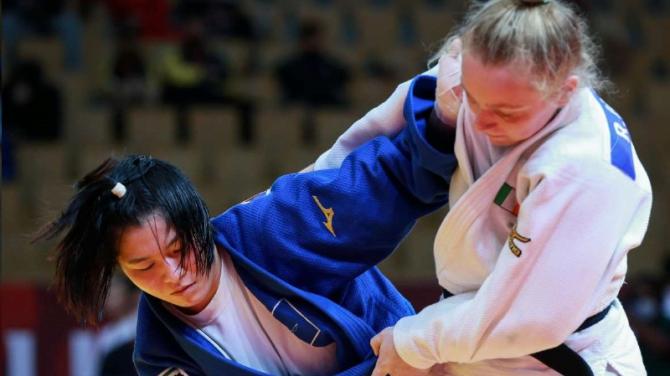 A TALENTED local Judoka hopes to "do the town of Omagh proud" as she gears up for her much-anticipated Commonwealth Games appearance in less than two weeks.

On August 2, Rachael Hawkes from Omagh will come up against world-class competition from around the globe in the women's under 70kg Judo section at the Commonwealth Games in Birmingham, which will be the culmination of months of arduous training and preparation.

Rachael started Judo at the age of six when she joined Omagh Judo Club, and in recent years her relentless hard work has earned her national and international acclaim.

Most recently Rachael won European and World Cup medals in countries such as Bosnia and Cameroon, and with the Commonwealth Games fast approaching, she is currently focusing on training to ensure that she can compete at her best. Currently, she is ranked 72 in the judo world ranking list.

Speaking ahead of the games, Rachael said: "It's surreal to think that in less than two weeks I will be at the Commonwealth Games competing against Olympic-level competition.

"At the moment it's all about preparation and training, and in recent months I am thrilled to have attended some really good training camps in Mongolia, the Czech Republic and Hungary.

"I have been training loads, travelling loads and competing loads. I am looking forward to getting out there and giving my best performance. I am very excited, but obviously there is that element of nerves as well!

"It would mean a lot to get a medal for Northern Ireland at this level, and overall I think I am capable of it. I really want to go out and do myself proud, do Northern Ireland proud, and of course, do Omagh proud!"

Despite having travelled the globe thanks to her Judo exploits, Rachael has always been a local girl at heart.

Outside of Judo, Rachael has a passion for marching bands, and is a member of both Mountfield Pipe Band and the Blair Memorial Flute Band, Omagh. She is also a welder by trade and when she isn't competing or training, she works with Coote Engineering Ltd, Ballygawley.

All in all, she has praised the local community, which includes those in her local bands, her workplace and family and friends from near and far, for what has been an "immense" show of support during her Commonwealth journey.

"The support I have received from the local community has been immense," she said. "I have been a member of Mountfield Band since I was a young child and everyone has been so supportive, and I joined Blair Memorial last year, and they have been the very same. Seeing a banner up in Omagh meant an awful lot to me, and it is always lovely to go to band practice and have everyone asking how my judo is going.

"I also have to give a special mention to my place of work, Coote Engineering Ltd. They have been really flexible when it comes to my sport and understand the situation in terms of competing and training. It is a fantastic place to work, and even though female welders aren't all that common around here, I have been welcomed in with open arms and have had to many opportunities to learn and enhance my trade."

Rachael added that she wouldn't be where she is today without the unending support of her family, which includes mum, Fiona, and brother and sister, Orr and Sarah.

"My family have supported and encouraged me from day one, and that's invaluable. They have been through the blood, sweat and tears. They have seen the stuff no-one else sees, from the injuries, the losses, and all the rest.

"My family will be over at the Commonwealth games to support me and cheer me on. The excitement is building. I am hoping all the preparation will be worth it, and I can bring back a shiny medal for Northern Ireland!"