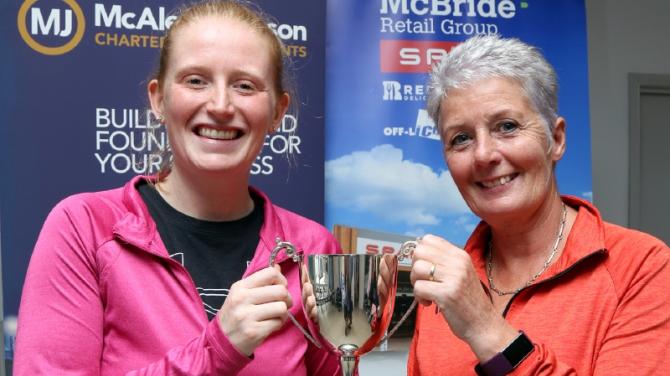 THE arrival of some of the warmest days seen in Northern Ireland this year so far didn’t come a moment too soon for Omagh Lawn Tennis Club, which played host to the Tyrone Senior Open Championship from July 15 to 24.

"The opening weekend of the tournament was marked by sunny skies and searing temperatures as players from across Ireland arrived in Omagh to take part in the competition, which saw some scintillating tennis played across the course of the week as crowds of local tennis fans gathered each evening to watch the action.

"Heading into finals weekend, unfortunately the weather took a turn for the worse with players battling difficult conditions including blustery winds and torrential rain as the competition neared its close.

"On Sunday, heavy rain showers eventually gave way to sunny spells as the final matches were played out in front of an enthusiastic crowd," a spokesperson said.

The highlight of the weekend was undoubtedly the men’s open final, where top seed Cian McDonnell (home after his sophomore year on a tennis scholarship at the University of North Dakota) dropped his first set against second seed Gareth McGreevy, before roaring back to take the next two sets, 6-2, 6-3.

"It was incredible to see such a high standard of tennis being played in Omagh and a fantastic week was enjoyed by all.

"Huge thanks go to event sponsors McBride Retail and McAleer Jackson for their support of the event and also to the many volunteers at the club who offered their time and support to help the event run smoothly," the spokesperson added.

The results are as follows: