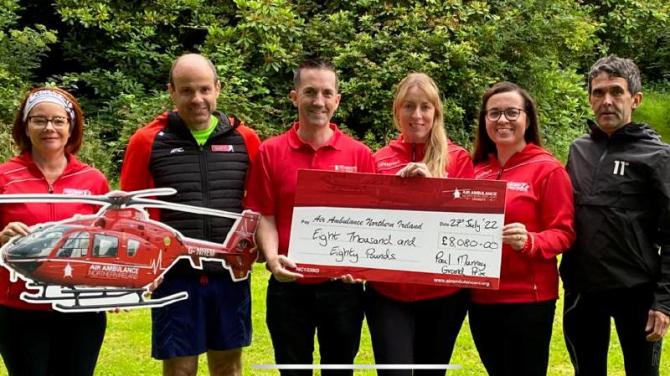 The unique event continues to grow in popularity attracting entrants from throughout Ireland. Club Secretary Donna McKenna said “We are grateful for the support of runners, the community and other running clubs allowing us to raise funds for this vital service”.

"It was fantastic to see so many people taking part in the Grand Prix series over the four weeks and how the whole community came together in making this event so remarkable.

"This huge donation, in memory of Paul, will fund the service for nearly two days, potentially helping up to four individuals following a serious trauma or medical incident.”

The service brings urgent medical assistance to anywhere in the province, operating seven days a week for 12 hours per day. It can get to anywhere in NI in approximately twenty-five minutes.

The service has just marked its fifth year in operation and in that time the HEMS has been tasked over 3,080 times. Air Ambulance NI attends to patients who are seriously ill or injured, bringing emergency pre-hospital care direct to the casualty with the aim of saving lives, brains and limbs.

Air Ambulance NI aspires to raise £2 million each year to sustain the service so we are all incredibly grateful for the continued support from Knockmany Running Club and the Murray family.